This episode is about dramatically magnified molecules – specifically, it’s about molecular forms that have been translated into architectures that dwarf the human body. We’ll hear from cultural historian Celeste Olalquiaga on the ruin of a helical mall in Caracas, Venezuela, and the historian of science Soraya de Chadarevian, who will illuminate the fantastical molecular forms broadcast on television during the Cold War. 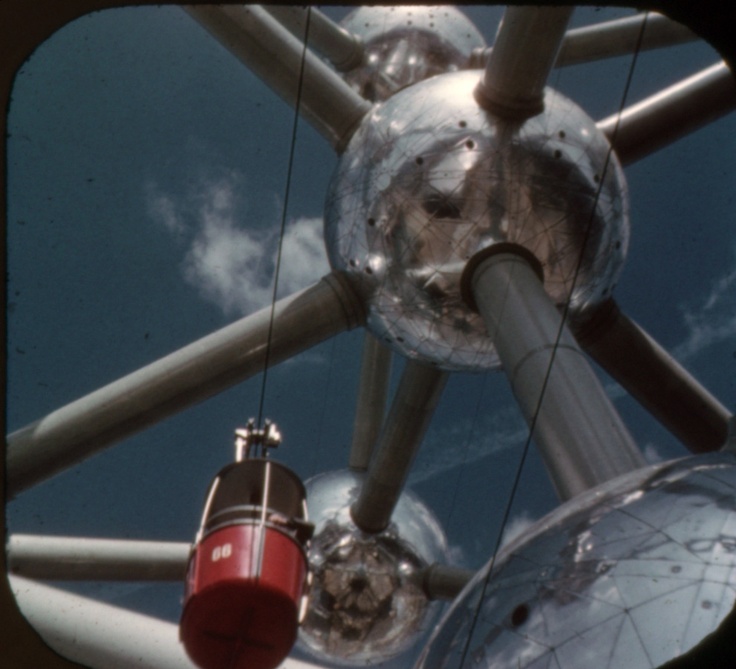 The Atomium, photograph from from a View-Master souvenir reel of Expo ’58, Brussels World’s Fair 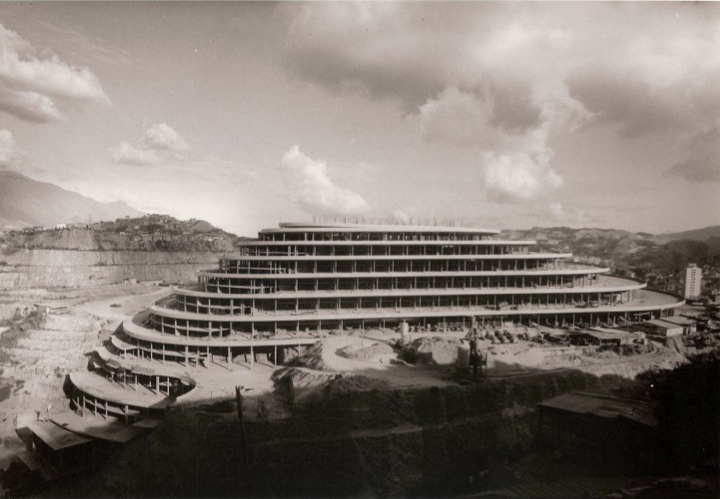 For this week’s show we’ve also created our own molecular architecture – one perceivable only through sound. It’s a virtual reverb space build by ATOMIC radio sound designer Sam Conran, inspired by the model below of a molecule of a sperm whale’s myoglobin, a protein found in the whale’s muscle tissue.

Sperm Whale Myoglobin, 1960s, built by A A Barker, related to research by the crystallographer John Kendrew. Laboratory of Molecular Biology, Cambridge, England.

Inside this myoglobin molecule we’ll hear a new radio play written just for this molecular sound space by the writer Daniel Marrone, performed by Janina Lange and Edwina Attlee. (Scroll down below for the poem featured in the play.)

Find out more about myoglobin, the first protein structure discovered by X-ray crystallographers, here and at the Protein Data Bank, an enormous archive of the atomic structures of every protein scientists have mapped that was also a vital source for the sound space we made for this episode.

Ground being prepared for the construction of El Helicoide, 1957-8, http://proyectohelicoide.wordpress.com

More about this week’s contributors:

Celeste Olalquiaga is a cultural historian currently working on a project surrounding El Helicoide in Caracas, Venezuela, that will feature exhibitions, events and a book reflecting on the building’s complex history. Find out more about the project at proyectohelicoide.wordpress.com where you will find links to their crowdfunding campaign.

Soraya de Chadarevian is a historian of science. She is a professor at the University of California Los Angeles in the Department of History and the Institute for Society and Genetics. Soraya is the author of many books, including Designs for Life: Molecular Biology after World War II.

Daniel Marrone is a writer and cultural critic currently working on a book about memory and the texture of comic books.

Edwina Attlee is a writer and researcher currently working towards a PhD with the London Consortium where she writes about theories of the everyday and everyday spaces. She is interested in laundry practices, the space of the home and commutation. She also likes fire drills and Roland Barthes. You can find her here https://twitter.com/eddieramones

Janina Lange is a visual artist working in Berlin and London. She is interested in pratfalls and pie-in-the-face scenarios and is currently preparing an exhibition at Heit in Berlin. http://www.heitberlin.de

The marvel of warm blood
in such a small cabinet
startles the heart,

invites comparison.
A fist moves a machine
many fists in size –

is mouseblood pumped
by a mere pawheart,
each chamber a curled,

and when it beats
sounds like a fist
pounding a desk.